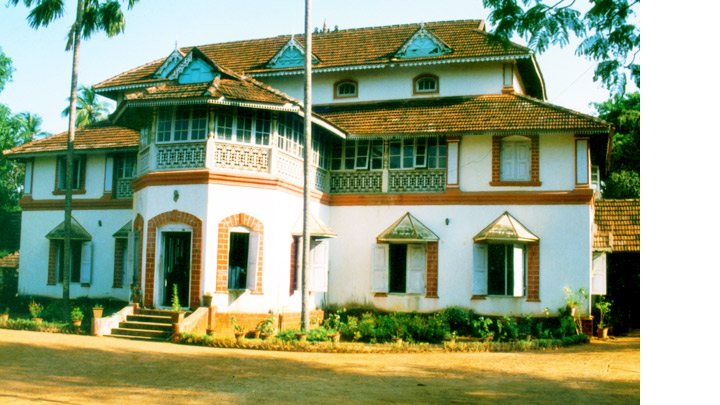 The Archaeological Museum was until recently accommodated in the Kollengode Palace building. Now it has been shifted to the Shakthan Thampuran Palace, a landmark in the annals of the Perumpadappu Swaroopam, the former ruling dynasty of Kochi. The majestic building houses a gallery of murals from all over Kerala and preserves a rare treasure of Veerakallu, temple models, olagrandhangal (manuscripts on dry palm leaves), megaliths etc.

Veerakallu or herostones are stone engravings and sculptures of figures and weapons belonging to the heroes of days gone by. Most of these were recovered from the forests of Wayanad and Thrissur.

The megalith collection includes earthen pots, urns etc. The temple models cast in plaster of Paris are excellent representations of the ancient temples in the State.

The archaeological museum is housed in the structure built in the year 1904 by the then Raja of Kollangode to his daughter. The structure is built in a mixed style, blending traditional as well as western architecture.

The Archaeological Museum in addition presents big life-size statues of well-known as well as eminent personalities of the history. You can find numerous models of very old temples, monuments, and so on. One of the most important features of this museum is manuscripts written on dry palm leaves that are generally known as the "Olagrandhangal". These sensitive manuscripts are preserved at the museum carefully. A big number of artifacts which are exhibited at the museum was in reality discovered in the forests of Thrissur as well as Wayanad district.

One among the most attractive belongings of this Archeological Museum in Thrissur can be a rare collection of Veerakallu or stone engravings as well as carvings of figures and weapons utilized by brave warriors of this region discovered at forests of Wayanad and Thrissur. Other items that are displayed include temple designs created using plaster of Paris a variety of megalith collection having of clay pots, Urn burials (nannangadi) black and red wares, black wares russet coated wares, stone age weapons, excavated resources from Indus Valley Civilization and Harappa, excavated equipment from megalithic sites like beads, iron implements, excavated materials from Cheraman Parambu (Kodungallur) stone sculptures starting from 10th century to 7th century, bronze sculptures starting from 12h century to 18h century.