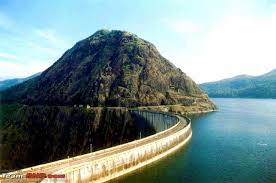 The Idukki Dam is a double curvature arch dam constructed across the Periyar River in a narrow gorge between two granite hills Kuravan and Kurathi in Kerala, India. At 167.68 metres, it is one of the highest arch dams in Asia. It was constructed and is owned by the Kerala State Electricity Board. It supports a 780 MW hydroelectric power station in Moolamattom, which started generating power on 4 October 1975. Technically, the dam type is a concrete, double curvature parabolic, thin arc dam.

This dam was constructed along with two other dams at Cheruthoni and Kulamavu. Together, the three dams have created an artificial lake that is 60 km² in area. The stored water is used to produce electricity at the Moolamattom Power house, which is located inside nearby rocky caves. The Government of Canada aided in the building of the dam with long term loans and grants.