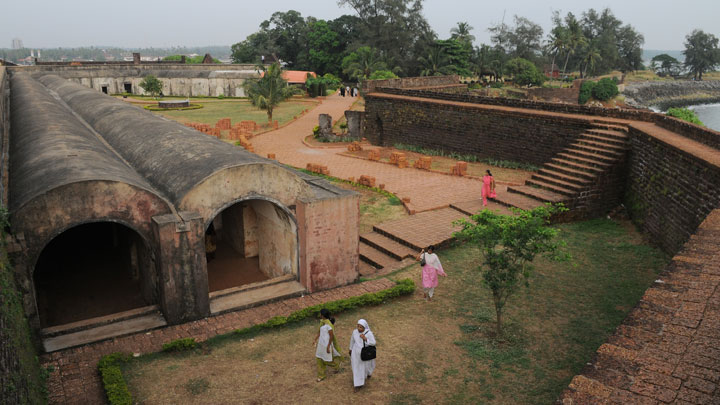 In 1663, the Dutch captured the fort from the Portuguese and sold it to Ali Raja of Kannur. In 1790 the British who seized control over the fort, renovated and equipped it to be their most important military station in Malabar.

Today, St. Angelo's Fort is a protected monument under the Archaeological Survey of India. The fort offers a fascinating view of the Moppila Bay and Dharmadom Island. Dharmadom Island, only 5 acres in area, is situated 100 metres away from the mainland in the Arabian Sea. The Moppila Bay is a natural fishing bay. A sea wall projecting from the fort separates the rough sea and inland water. Today, the bay has turned into a modern fishing harbour, developed under the Indo-Norwegian Pact.

The fort offers fascinating view of a natural fishing bay and a sea wall projecting from the fort separating the rough sea and inland water.

Facing the sea, St. Angelo Fort is one of the most attractive centers in Kannur district in Kerala. Located 3 km from Kannur on the coast of the Arabian sea, it is locally known as Kannur Kota and Kannur Fort Fort. It was built in 1505 by Dom Francisco de Almeida, the first Portuguese Viceroy of India with the consent of the ruling Kolathiri Raja.

The Dutch captured the fort from Portuguese in 1663 they sold the fort to the king Ali Raja of Arakkal kingdom. In 1790 the British seized the control over it and the fort became one of the important military centres of the British in Malabar.

The fort continued to be a symbol of military power and falls within the Kannur cantonment. The Kannur Cantonment is one of the 62 cantonments in the country. The Rijksmuseum in Amsterdam houses a painting of St. Angelo Fort and the fishing ferry behind the fort.

Built along the shores of Arabian sea, it is separated by a strong sea wall from the sea. The fort is a massive triangular structure of laterite with strong bastions and a moat. Eventhough some parts have collapsed and fallen into the sea it's ramparts are still in a fairly good state of preservation. A protected monument under the Archeological Survey of India, the fort gives an excellent view the Mappila bay, a natural fishing harbour and the Dharmadam Island sprawling in an area of 5 acres located in the Arabian sea at a distance of 100 meters from the shore.