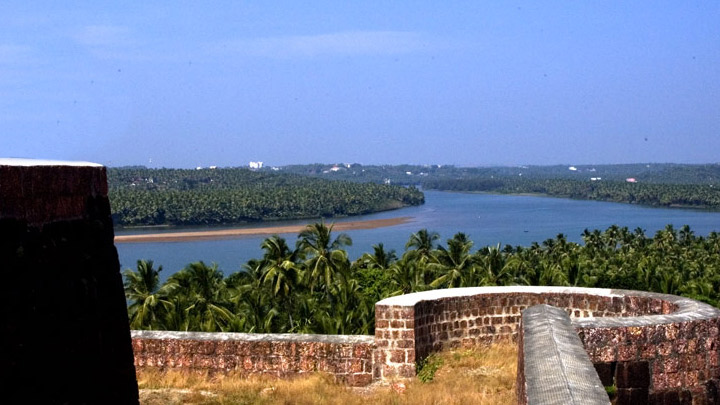 The ruins of the massive 17th century fort sprawled on the banks of the Chandragiri river is a place of immense importance to archaeology and history students.

The fort has an eventful history to relate... A couple of centuries ago, the river Chandragiri was considered the border of two powerful kingdoms - Kolathunadu and Thulunadu. When Thulunadu was captured by the Vijayanagara Emperor, the Kolathunadu kings lost the Chandragiri region to them. It was only in the 16th century that the great empire of Vijayanagara (presently under the Karnataka State) declined. But later the Ikkeri Naikkars or the Bedanoor Naiks took over the reins of Chandragiri as an independent region. Thus the Chandragiri Fort was built by Sivappa Naik for the defence of his kingdom. The fort changed hands over the years to Hyder Ali of Mysore and then to the British East India Company. Today it is a protected monument under the State Archaeology Department. The Chandragiri region was rejoined to the State of Kerala through the State Reorganisation Act, 1956, Government of India.

Situated near the confluence of the Payaswini River and the Arabian Sea, the Chandragiri Village is known for its large 17th century fort built by Sivappa Naik of Bedanore. The Chandragiri Fort, one among a chain of forts built by the same ruler, perched atop a hill is in ruins now. But the location offers a breathtaking view of the convergence of the river and the Arabian Sea. The place is a vantage point to watch the sunset from the ancient Kizhur State Temple at Chandragiri, which celebrates the annual festival called Pattu Utsavam. Chandragiri is situated 4 km from Bekal.