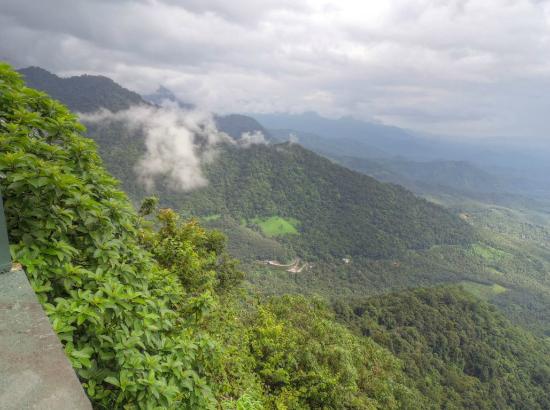 Lakkidi is the gateway of Wayanad as it is located at the crest of the serpentine Thamarassery ghat pass. There are nine hairpin curves from Adivaram (Downhill) to Lakkidi through steep mountains and a journey through the serpentine ghat pass is worth an experience.  It is about 2296 ft (700 m) above the sea level and the major town nearby is Vythiri which lies five km away.

The lush greenery of the hills, gorges and streams seen on both sides of the passage up the hill are sure to linger in the visitors’ mind for a long time. Tourists often stop by Lakkidi View Point, the vantage point which offers dazzling views of the surrounding cliffs and valleys.

Lakkidi has also emerged as a popular hill destination with many expensive resorts and plantation stays providing stay facility for foreigners and other affluent tourists.

Chain tree
You can see monkeys frolicking through the roadside and once you start travelling through the road to Vythiri, you will see a ficus tree on the left side. You will also notice a heavy chain anchored to the ground and tied around the stout branches of the tree.

There is a legend associated with the chain bound ficus tree.  It is said that a British engineer, after many attempts, failed to create a passage through the forests of Wayanad. Then a tribal youth, Karinthandan, guided him in making the route. The engineer was reluctant to share the glory and hence he killed Karinthandan. Local people believe that later the soul of the tribal youth started haunting the travellers on this way and at last a priest chained the spirit to the tree.