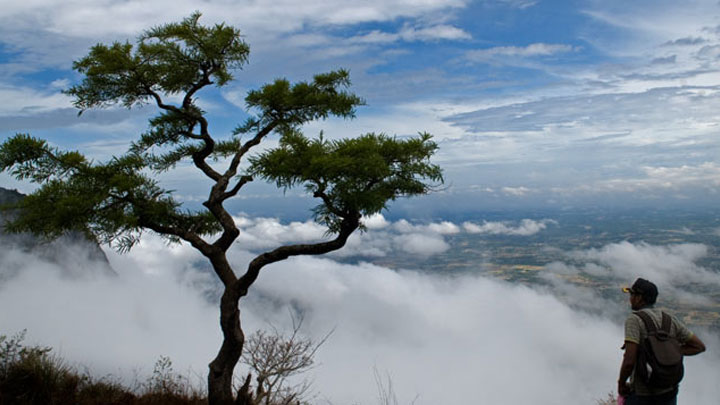 From the town of Nenmara in Palakkad district, the cloud-caressed peaks of the majestic Nelliyampathy hill ranges are a sight to behold. The height of the hills ranges from 467 m to 1572 m. To reach Nelliyampathy, one has to take the road starting from Nenmara that proceeds to the Pothundy Dam. There are about 10 hairpin bends that have to be negotiated on the way to Nelliyampathy.

The Pothundy Dam is a picturesque locale with facilities for boating and is a nice option as a picnic place. As the Ghat road winds its way up to Nelliyampathy, at certain places there are viewpoints from where the vast stretches of Palakkad district are visible with its extensive paddy fields forming a verdant carpet. It also offers a splendid view of the Palakkad Gap, which is a geographical phenomenon in the Western Ghats formation in this region, bringing into view, parts of the adjoining State of Tamilnadu.

On the way up, those interested in bio farming can take a close look at the privately managed farms and also vast expanses of tea estates managed by different plantation companies. The hills of Nelliyampathy are also well known for its orange cultivation.

Privately owned hotels and resorts are located at various points, as one goes up the hills of Nelliyampathy. The bio-farms located here are a major landmark as one proceeds up before reaching the topmost point at Palagapandi estate. The estate has a quaint bungalow, built during the period of the British rule in India, and has now been converted into a private owned resort. At Kaikatty, a community hall is available, which is usually used as a base by those interested in trekking.

Not far away from Palagapandy is Seetharkundu where one can have a fantastic valley view, and a 100 m high waterfall providing an added attraction. From Palagapandy, one can trek or go by jeep to reach Mampara; another breathtaking vantage point at Nelliyampathy. The area in and around Palagapandy estate has tea, cardamom and coffee plantations with adjoining hills allowing one to catch a glimpse of the wildlife in the form of Indian gaur, elephants, leopards, giant squirrel etc. and is also a paradise for birdwatchers.

…Nelliyampathy  is one of the small, but amazing Hill Stations in Kerala as well as in South India. This Hill Station is located in Palakkad District, just 75 KM away from Palakkad City. You can reach over there within 1 hour by cab. The road in between Palakkad City and Nelliyampathy Hills is really good and the PWD Authority has maintained it very well .

Nelliyampathy Hills is blessed with Tea/ Coffee/ Pepper/ few Orange Plantations, Deep Forest, Breathtaking Nature Views, Waterfalls during rainly season  and this Hill Station is also suited for Trekking, Jeep Safari, Bird and Animal Watching. ( You can see wild animals, only if you have luck).

Once you start from Palakkad City towards Nelliyampathy Hills via Koduvayur, you will enjoy lush greenaries on both sides of the road.

As soon as you reach Koduvayur - A small town, You need to proceed to Nemmara- a small down hill station , then go ahead towards Pothundi - A beautiful Dam, Reservoir and Valley View Station, en-route to Nelliyampathy Hills.