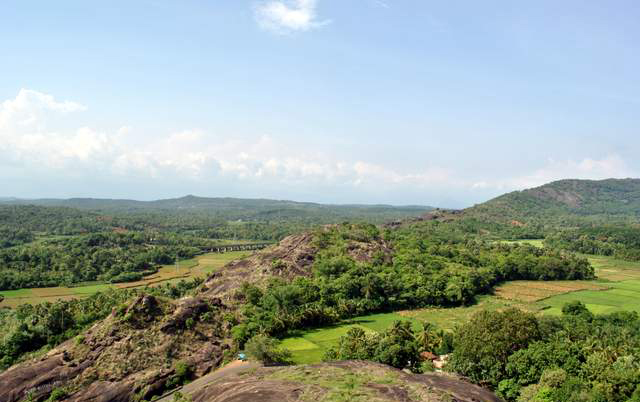 Anangan Mala Hills, situated at Ananganandi, near Ottapalam is ideal for adventurous rock climbing and trekking. This hills is more than 10 km. long covering 3 Panchayaths and Ottapalam municipality,Peak height is 1200 metres from ground level.

Ananganmala, a stretch of mountain that extends between Ottapalam and Cherpulassery, traversing through Ambalappaara and Kizhur, forms a part of the Western Ghats. This stretch of mountain is one of the most picturesque natural locations in the entire district of Palakkad,Kerala. I have to say, especially during the monsoon seasons when mother nature adorns her best, cladding her in thick green robes of vegetation.

Anangan mala or Anangan hills can be taken as a  land form that extends  above the surrounding terrains of Kizhur.Melur, Ambalappara. Kothakkurissi .Chunangad and Ananganadi situated just ten kms away from Ottappalam towards north .Though the land form is called mountain or mala by the local people,we can not  take it as a mountain. Mountain is a large land form that stretches above the surrounding land in a limited area with the form of a peak. It should be steeper than a hill.as per the Oxford dictionary  definition  mountain  should  have more than 600 meters height.When we define a mountain  we should also take into account of mass elevation,volume,steepness,relief,spacing,continuityetc. Anangan mala is 1293 feet high at the peak just above Ananganadi.Authorities  consider eminences above 2000 feet high as mountains. . .however local people have accepted it as a magnificent mountain.