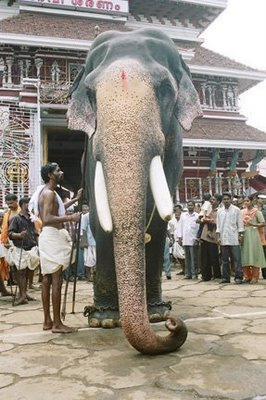 Padmanabhan was brought to Guruvayur by Cherukunnath Namboodiri as his devout offering, and was offered to Lord Guruvayurappan after performing the proper function of "Nadayiruthal”.
Guruvayur Padmanabhan is the elephant of Sri Guruvayurappa. His divinity and his magnetic appeal makes him the god's own elephant .
According to elephant craze people of Kerala he is one of the auspicious elephant with all the signs.He is from Nilambur forests.
Erandathu Puthenveettil Achuthan nair and Madhavan nair, known as E P Brothers offered him to Sri Guruvayurappa. Then he was 14 years old. Now he is crossing his 70s.
In 2004 he got 'Gajaratnam' from Guruvayoor Devaswom Board. Now he is 'Gajaratnam Guruvayoor Padmanabhan'. Elephant lovers associations and temples honoured him several times.
For festivals he is always considered as the 'Ezhunnellippana'. The elephant who carries the idol of chief diety is known as 'Ezhunnellippana'.
Some of his peers have more 'Thalappokkam' than him then also he is considered as the leader because of his calm nature and he is also the successor of the legend Sri Guruvayoor Keshavan.

When Padmanabhan was brought to Guruvayur, there were only one or two elephants here.
As Cherukunnath illam was swelled with more and more children with His blessings, the number of elephants in Guruvayur temple also increased one by one with the coming of Padmanabhan.

Padmanabhan grew, through years, to be the most important of all elephants in Kerala, and wherever he was taken for Utsava, he was to be given the most prominent place in the procession.
In all utsavam, if he was present, it was his privilege to carry on his head the "Thidambu”. He never tolerated any other elephant enjoying this right. As soon as the "Thidambu” was placed on his head,
he would stretch the whole of his body forward, and raise his head to the maximum, so that he would appear to be the highest in the whole array of elephants. This posture would continue till the "Thidampu” was taken down after the procession,
and thus he was able to maintain his kingly posture everywhere. He had never caused any injury to anybody throughout his life-time. Impressed by him, the Maharaja of Ambalapuzha awarded him with the precious prize, "Veerashringala"